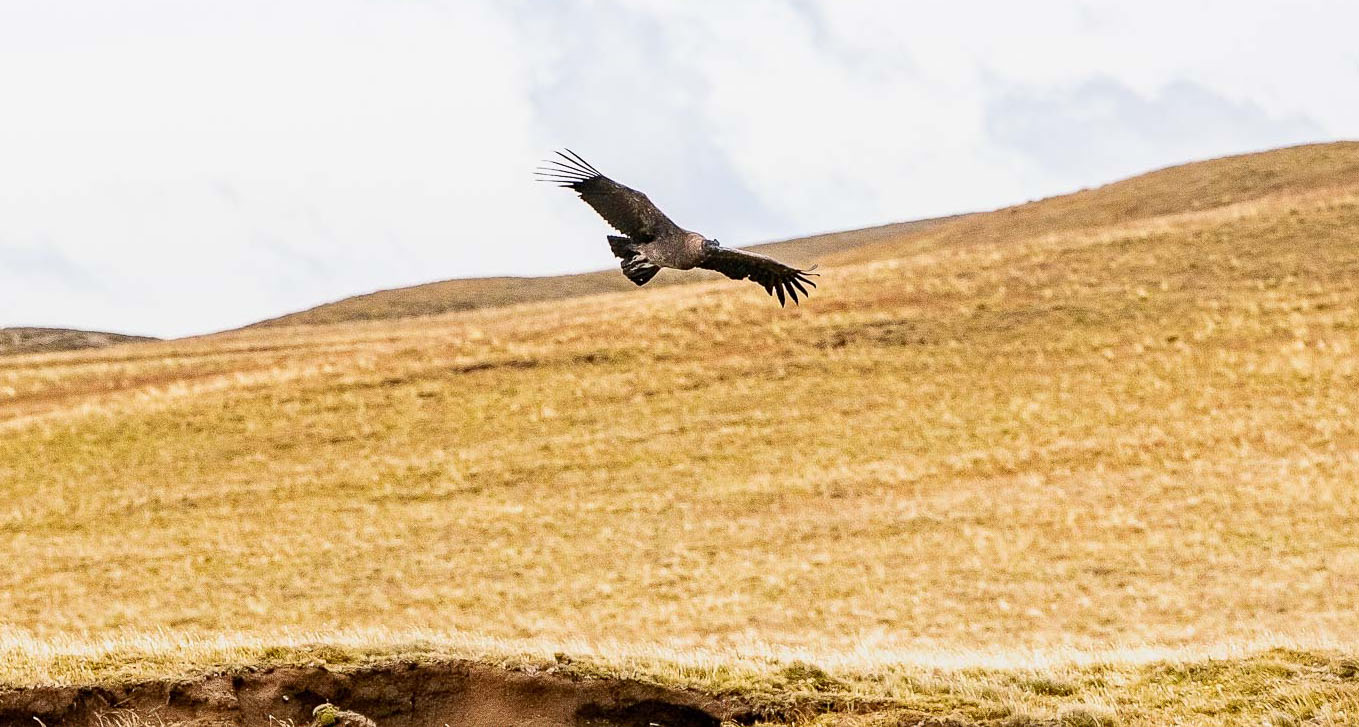 A strange, but very eventful week comes to its end. As we began our fifth week of the season, we were all expecting very consistent weather and water conditions. Especially with the amount of fish now already in the system, these weeks are usually very predictable and consistent. While the river was in absolutely great shape as we headed into the week, constantly changing water level, wind direction, light condition, and barometric pressure, ultimately affected the activity of the fish and made the fishing quite challenging on some days, however. Luckily, we were welcoming a fairly intimate group of “only” six this week, including some experienced Río Grande anglers such as Gerald and Irwin. Dave, another of our anglers this week, was a keen spey caster who could efficiently cover the water from the first day on. But even our new friends Michael, Jarod, and Tom, all picking up the spey rod for the first time, had a good understanding of what the fly is supposed to do in the water, listened carefully to their guide’s advice, and picked up the methods we use here very quickly.

As we started the fishing week, the river was just starting to drop and clear after it had come up on Thursday night. Heavier tips and more visible, water-pushing flies were the trick of the trade. However, it was merely a push of water that would drop back to almost zero within just a day. A severe thunderstorm with hail, heavy rain, and lightning bolts crashed down onto the pampa as it passed us on Monday afternoon. It only took these few hours of downpouring rain to push the water level back up about 10 inches (25 cm) overnight, leaving us with only a few inches of visibility in the water the next morning. Being just a “push” of water, the level would drop down quickly, but the rain that precipitated in the mountains kept the water fluctuating. All these very rapid changes in water level and barometric pressure, in combination with some very hot and sunny days that pushed the water temperature up to over 18 degrees, noticeably affecting the activity of the fish, making it really hard to move any of them throughout long periods of some sessions. Luckily, the Río Menéndez was once again a saving grace, as it was less severely affected by the changes occurring in the main river. Still slightly off-color and with comfortable flow, the conditions looked great, and Irwin managed to land three nice fish in his very first session, including a cracking 18 lb, kyped-up male. Just two days later, this little river again blessed us with incredible fishing, while the main river remained tough. In just Tuesday evening’s session, Jarod and Tom were able to hook into an unbelievable number of 15 sea trout, all on small nymphs and single-handed rods. While unfortunately some very big ones were lost, both were able to land multiple beautiful double-digit fish. Dave also put a good ending to a tough day, landing a 16 lb fish just before the last light faded. Content and happy, he left it as the last cast of the day.

The fishing was patchy and unpredictable. Short periods in which the fish became active gave us windows of opportunities, and one had to get a bit lucky to be in the right pool at the right time. Michael was able to intercept a phenomenal, fresh 13 pounder amongst some other good fish. But within this randomness, consistency was key to take the chances given to one. Gerald remained consistent, putting the fly into the right spot on every cast, even if they were not rewarded. But, his consistency eventually paid off. A fresh 17 lb stunner on the second to last day, and then landed another cracking 17 lb male on the next morning, only to be outdone by an unbelievable 24 lb fish he was able to bring to the net at the start of his last evening session. Gerald stopped fishing after that fish, happily leaving it as last cast of the trip. Just as Irwin kicked off his week, he ended it on a high note, landing a great 14 pounder during his last morning session, and two more nice fish during the evening – he also stopped after the second one, and both Gerald and Irwin peacefully called it a trip and headed back to the lodge before the sun went down. Our universe was back in order, conditions seemed to have settled, the fish seemed more active, and the fishing was once more predictable. Looking at the plain numbers of this week, it ended up being much more prolific than expected. As random and patchy as it was, some anglers intercepted good numbers of fish, while others had to experience dry periods in between. But despite all of its highs and lows on the fishing side of things, there is so much more to a week down here than “just” catching fish. Getting to meet new crazy people from completely different parts of the world that share the same passion, sharing precious time on the river with old friends, feeling the unparalleled freedom that only the wide-open skies of Tierra del Fuego can give you, and letting it all sink in over a good glass of Malbec. Even if the fishing is challenging and unpredictable on some days, it is very hard to let that get in your way of having an amazing experience in this very special corner of the world!

What a week! My hands are still shaking, and I am still trying to catch my breath. Such an eventful, fun, successful, and overall amazing week that none of us wanted to end.

A full house with some good friends returning to visit us: Vini and Luke, who we got to know last year and immediately were adopted into the Kau Tapen family. Jim and Roger both of whom have been coming here for a number of years and every season we cannot wait to welcome them back. Graeme, who had been here a few years ago and was as prepared as could be – mentally and physically. We also had the pleasure of welcoming some new faces: Piggy and David, two good fishing friends who have fished this river before but never here at Kau Tapen with us, both are amazing fun, on and off the river, and were such a great addition to the group. Last but not least we have Charly, his brother Russel, and son Nick, along with their good friend Jorge, all of whom started the week as sea trout and spey casting rookies.

The previous week’s fishing had been a bit difficult with variable weather and water conditions. Our fingers were crossed, and we were hoping for more consistent conditions this week. And so it was – the river settled, cleared up even more and dropped at a very, very slow pace. The consistent water conditions enabled the fish to settle in their pools and as soon as that happened, they became more active and miraculously “switched on” again. Slightly warmer water (14-16 °C), thanks to warmer days and mild nights caused the fish to be more surface oriented. All of these factors combined, made for some of the most amazing fishing we’ve had so far this season. Despite seemingly tricky conditions during the first three days (only a little wind from a strange north-easterly direction and bright skies), the fish were very active. During the very first session, Jorge and Russel, who were “just” practicing how to spey-cast, were able to land 6 amazing fish on light sinking tips and small flies. During their evening they kept going, hooking into 9 more fish (!) and Russel was able to end the day on a stunning 17 lb fish. Most fish were chrome bright and in outstanding condition, fresh from the ocean and full of strength. Roger and Graeme also experienced a good start to the week, both managing to land a 16 lb fish, amongst some very nice specimens.

While we could not have asked for a better first day, the fishing gods were kind and gave us an even better second day. Almost every pool was working and literally every one of our anglers was able to land multiple fish! Just over 60 fish – an astonishing number that the group managed to hook in just that day, most of the fish in outstanding condition. Piggy alone managed to land 8 fish that day, including two 16 pounders and two 14 lb fish.

Graeme brought an astonishing 9 fish to the net! Jim also took care of business quickly and landed a perfectly chromed-up, 19 lb fish within his first 10 casts of the day. The quality of the fishing during these days was simply outstanding – most of them fresh, incredibly strong and full of stamina! While we were taking it all in and enjoying the ride, we were expecting that the fishing would slow down again at some point, but we were blessed with one more day. Tuesday especially produced some larger fish than the previous days, such as David’s outstanding 16 lb fish, Nick’s 17 pounder, Piggy’s amazing 18 lb fish, another stunning 18 pounder for Charly, and Russel’s fantastic 19 lbs. And Graeme – Well Graeme simply did not stop and kept riding his wave, landing 12 fish that day, including a perfect, kyped-up 19 lb male and hooking into even more!

While we got the catching part out of the way during these first three days, the rest was just easy riding. The atmosphere around the lunch and dinner table was great – relaxed, fun, happy, and a bit tired from such eventful days. Long nights with maybe the odd drink too many and hilarious stories that will stick in our heads for a long time to come. It all added to the fun and made this week as special as it was. We could not have asked for more – but the week was only half over. And, while the fishing eventually did slow down a bit, the bar had been set very high and to be quite frank, the fishing remained pretty dang good for these last three days, at least judging from a “normal” standpoint.

Although this week was dominated by amazing fishing and lots of activity, it was also the week of the lost battles. Just like the four monstrous fish that Vini and Luke hooked into but unfortunately were not able to bring to the net after some spectacular fights. As painful as it is, those are the fish that fuel the need to come back more than the ones landed, and they surely make for some great stories.

During these last days, still great numbers of fish were hooked and landed, and Graeme finally managed to achieve the well-known “20/20”: Landing 20 fish during the week with one over 20 lbs, with the exception that did it twice! He landed over 40 fish and two stunning fish of 20 lbs, something that only very rarely occurs on our beats. As well prepared as he was, Graeme surely came, saw, and conquered – incredibly well done and congratulations from all of us here at Kau Tapen! I feel like I could keep writing countless more lines after a week like this one, but I will let the attached images do the talking and leave the rest to your imagination. Not only am I incredibly happy with the fishing results of the week, I simply had an amazing time on and off the river and thoroughly enjoyed spending time with every single group member, sharing unique moments and making new friends. This has been a very special week and I am sure I am speaking on behalf of the entire Kau Tapen team.

Here’s hoping we get to repeat the week next year! 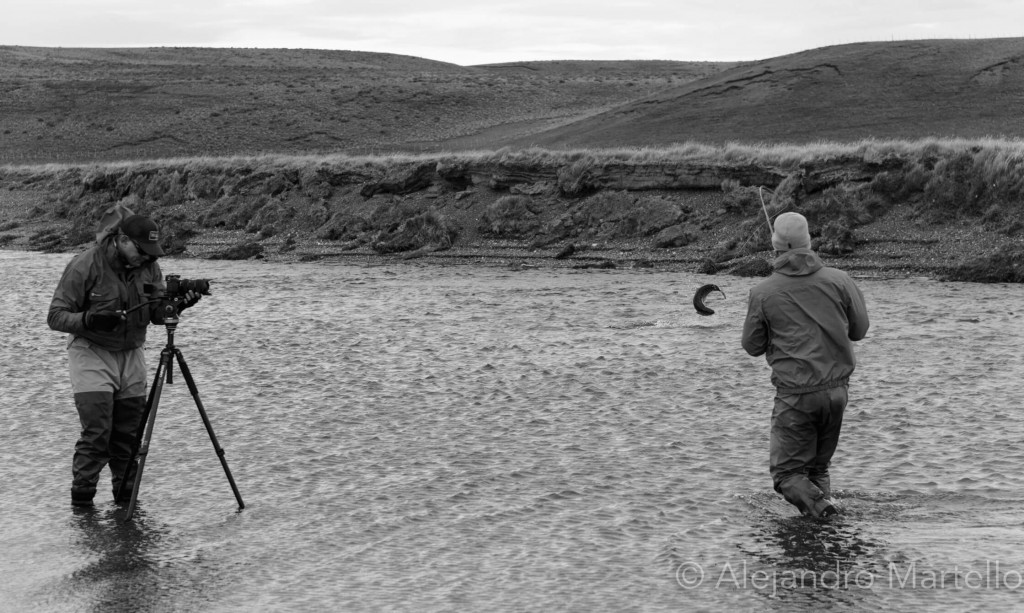 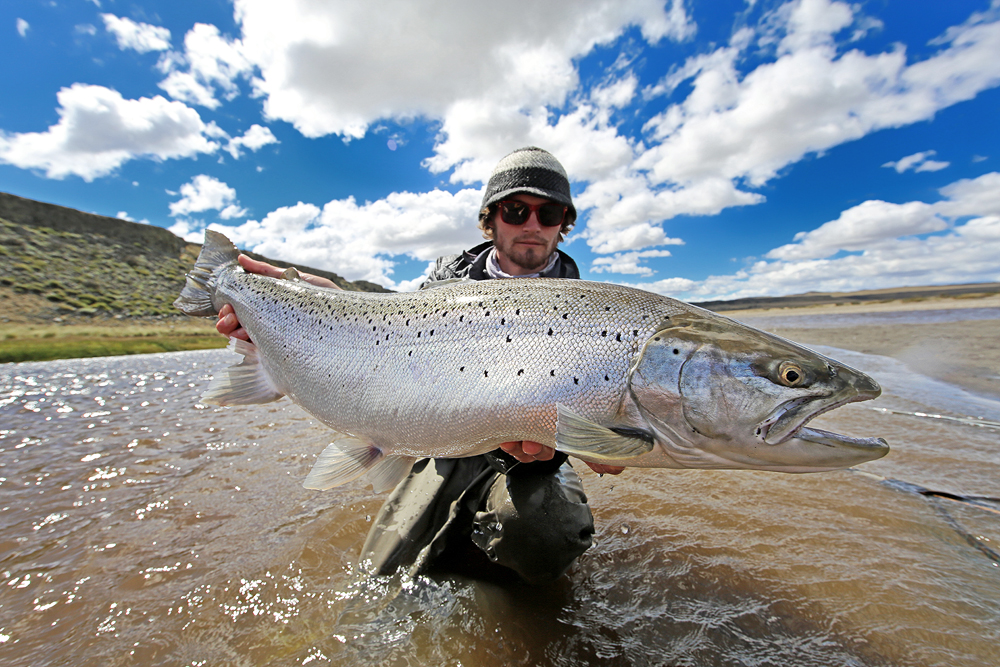 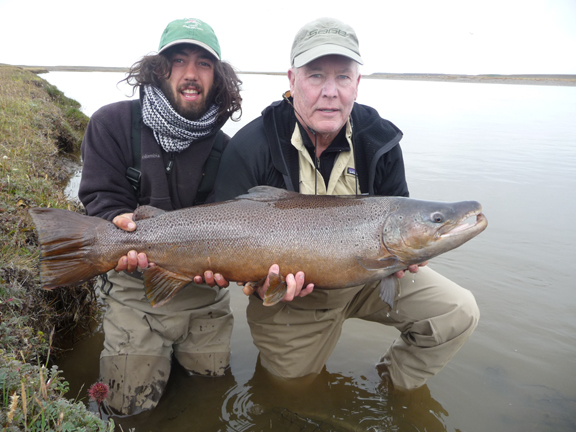