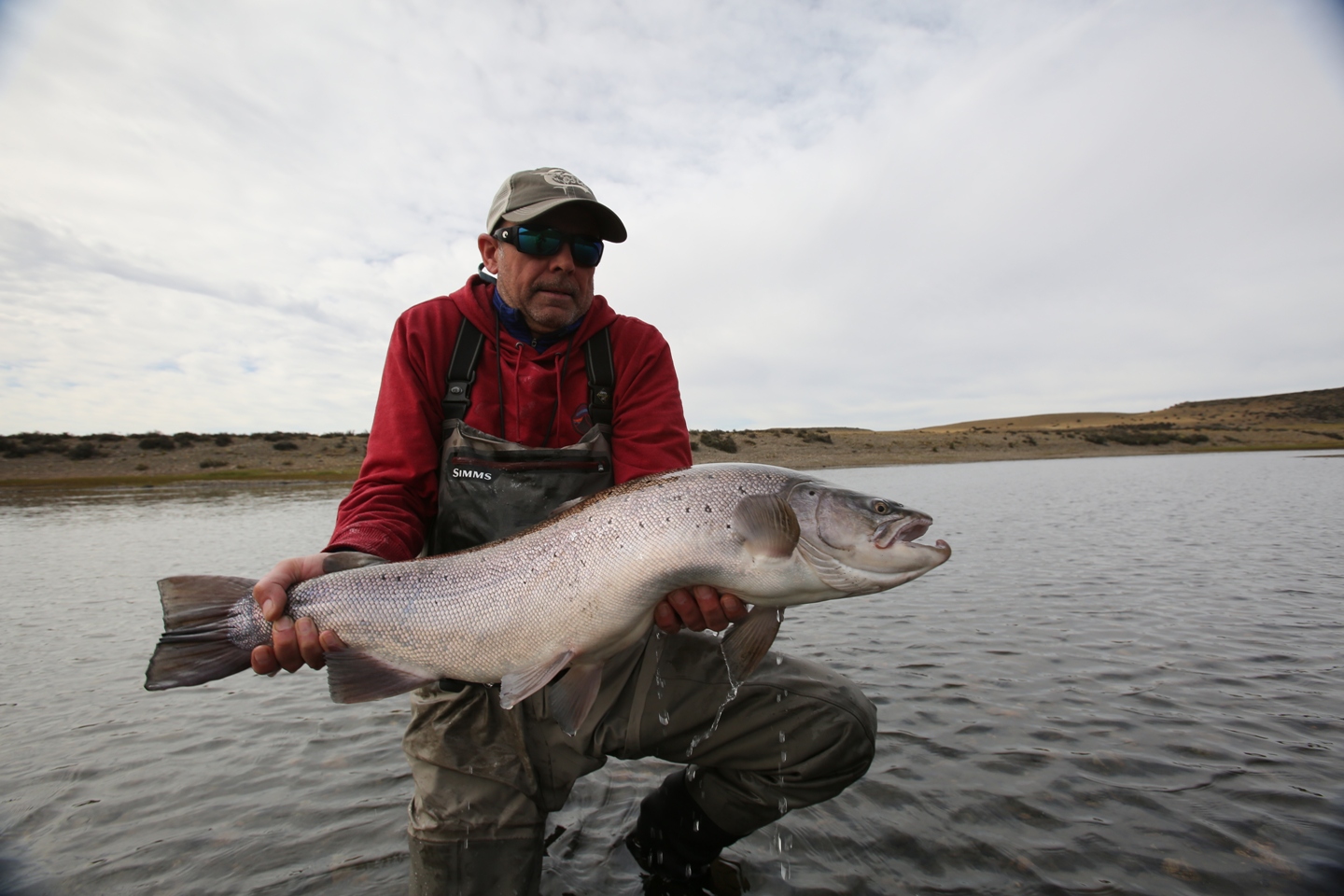 For week #5 at Las Buitreras we received a group of anglers from Sweden, Wales, Ireland, England and US.

For David it was his second time at our lodge, coming from the US with his friend Ginny. For her this was a mix of fishing and casting tuition, something that has been a reason for many anglers to come. In other words, Speycasting clinics with our guides/instructors on the riverside while fishing the waters of the Río Gallegos. What better way to learn?

The water conditions for the beginning of the week were probably not the best, as the river kept low and clear. Sunny days and warm temperatures made the anglers and guides focus on the mornings and late evenings. The level was -15cm and the water temperature ranged the 10-16°C.

For the conditions the leaders were extended up to twice the length of the rods, and the flies for the conditions were mainly Salmon flies in sizes #10 and #12, with the usual rubber legged nymphs in similar sizes.

The tactic was simple, looking for running water as the best place for the fish to get oxygen. Runs like Outer Limit or Lawsons Pool were the ones as well as Turning Bank in Beat #1 were Rob Conway managed to land a 16lb male helped by guide Pollo.

There was a marked arrival of a fresh run of 5lb sea trout, normal for this part of the season, providing of more action in between the takes of the bigger ones.

The sunny warm days may not be the perfect ones for fishing, but certainly to have a traditional asado (BBQ) outside prepared by our chef. For the evening of Thursday we had Juan Manuel joining the Mexican dinner evening, who delighted the group with some of the best songs in his repertoire.

The beginning of week nr 4 at Las Buitreras Lodge started with the river at +15cm level, with a mild morning breeze blowing downstream. The positive conditions led to a successful first day –just like week nr 3- with 20 fish caught and released.

After that, and by the second day, the water started to drop and clear up quickly. Still for David conditions were good enough as to land a fresh 18 pounder in the Outer Limit. The arrival of a large run of smaller fish was followed by a number of record size fish that rolled on the surface on their way upstream.

The high summer temperatures on the second half of the week made fishing tougher than usual and waiting for the last hour was the key, in spots like Little Corner or the Limit Pools.

The water level by the end of the week was -5cm, and water temperatures that reached 18°C.

The improvement of the Rio Gallegos conditions by the end of the second week of the season gave opportunity for the new group to have a look at some of the best that this river can give. As reported before, by day one we already had 21 sea trout over 4 pound landed (with one over 20lb), for a group of –mostly- first timers in this river coming from the UK, and the Swedes, here for the 2nd time at Las Buitreras.

The group of first timers was egger to learn the techniques that sea trout fishing demand, as well as some spey cast to handle the circumstances. So they did, and they all got into double figure fish action by the second day.  The water level kept around +20cm and +15cm, with a dark tea color, and temperature around 6-9°C. Horse riding during the sunny afternoons, a typical asado (barbecue) outside, or Christers, Diegos and Peter birthdays were some of the highlights apart from the fishing, with great moments and good laughs.

By Friday evening there were 120 sea trout recorded in our catch book and a happy group making the proper toast for a week they’ll never forget. The figures: 120 fish caught (over 4 lb) with the biggest one, a 24lb landed and released by Lawson Jones from Wales, also top rod of the week. Average weight for the week 8,8 lb.-

Testimonial
We have just arrived home to the Isle of Man, tired but very happy. We are indeed fortunate to have fished such a wonderful River, in stunning unspoiled surroundings. Many many thanks for lending the rods and reels to myself and Alison and to your guides including Lawson for their patience, help and instruction. With brand new unused boots and waders and having never fished double handed rods before, we both accomplished double figure fish, more than we dared dream of when we arrived. Your fly that you gave me when I bought the fly box caught my last fish, on my last cast! An inspired choice!! Good food, good company, good wine and unforgettable awesome fishing!
Tony with his personal best seatrout from Las Buitreras.

Thanks Again to All for an experience of a lifetime…it will be hard to beat ..ever. no doubt we will see each other again sometime soon.
Tony & Alison 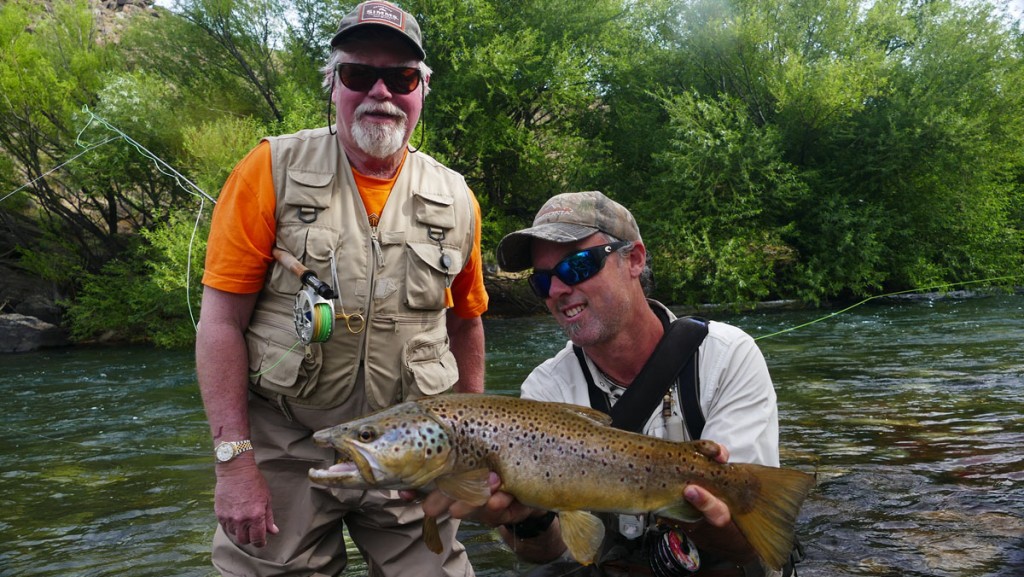 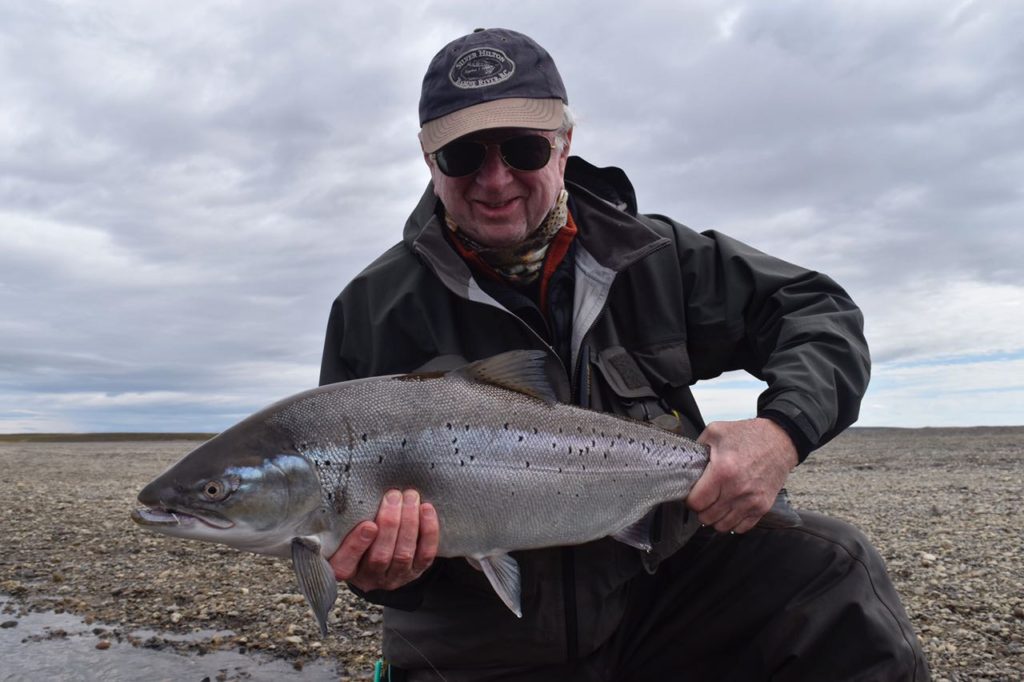