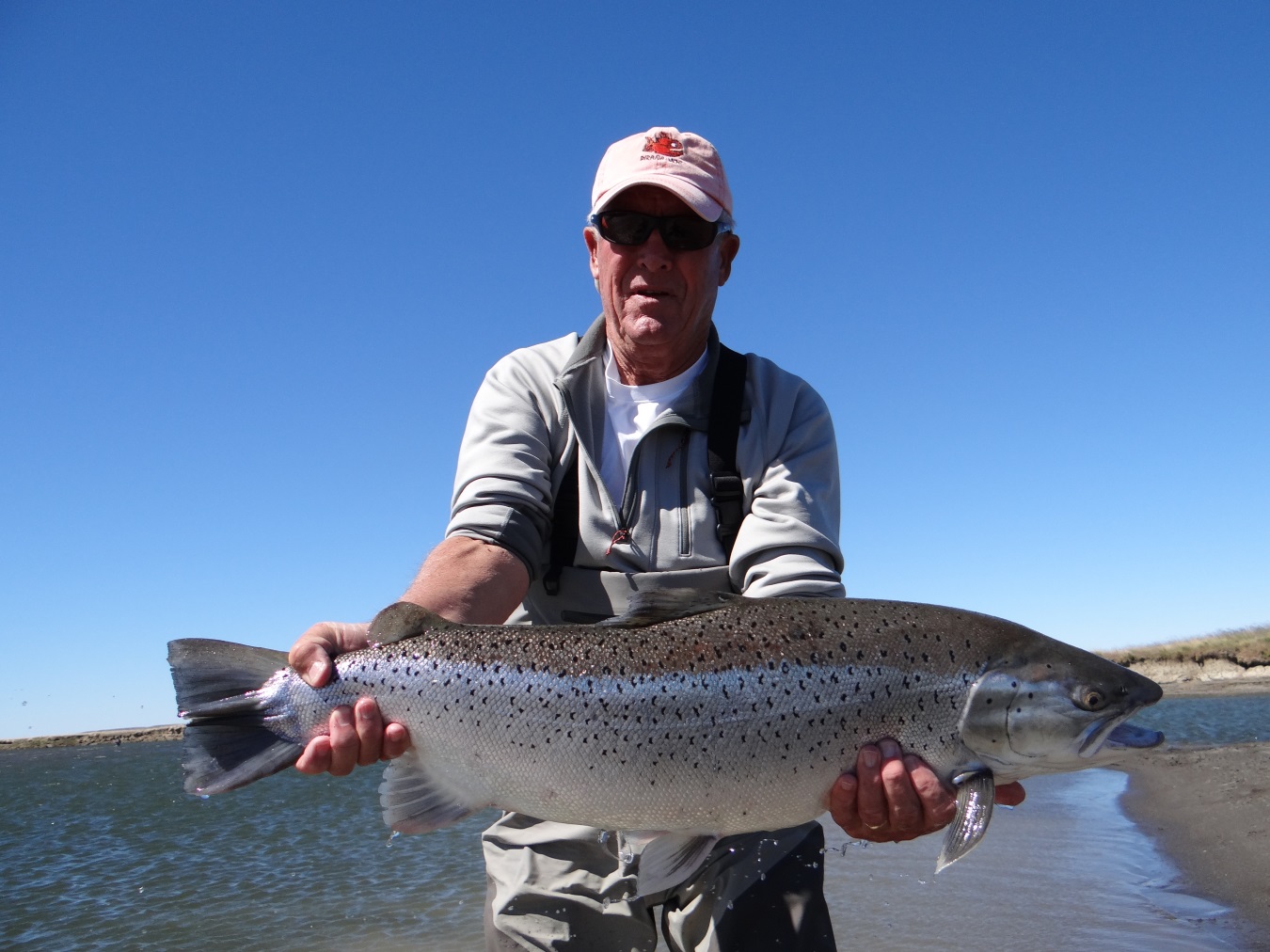 Another great week of fishing just ended at Estancia Maria Behety Lodge. 220 fish were landed. 34 fish over 15 pounds, 9 of these were over 20 pounds. The average weight was 9.8 pounds.

Fishing was very good, similar to last week. The river is still in excellent condition with low and very clear water. Again, a few showers during the week but no heavy rains. Very windy the first two days and then quite normal. The wind blew mostly from west.

Despite the remarkable low water level, the fishing was very good. Some sessions were hard work whereas others were incredible. For the first time this 2015 season, we had a guest who landed a fish on every session. Mr. David S. successfully joined the NBSC (No Blank Session Club).

It’s a lot of pressure to be the guide of someone with no blanks in the last two days of fishing. You know the other guides have been successful, so your reputation is at stake. Fortunately David has eased the pressure on Thursday morning and evening with a fish landed within minutes. On Friday morning, another quick fish in the net before 9 am was making things too easy for both of us. But things were tough on the last evening, no strikes or sign of fish on the first pool. On the second pool, after 20 minutes, Fish on! But after 30 seconds of fight, a fresh 4 to 5 pounder jumped and got rid of the Aurelia Prince. After that there wasn’t much activity, so we moved to pool #3. First cast and as soon as the nymph landed, David hooked a nice double figure fish, and everybody happy. But happiness wasn’t long; we lost the fish in the shallow water, when the fish was ready to be netted. We were so close to get this one!

Of course, frustration started to arouse. We were only one and a half hour to the end and the fish weren’t in the mood. We tried a riffle-hitched mini sun-ray on floating line and David had a good strike over the seam, it was definitely a sea trout, a small one but a sea trout, no doubt. When I netted it, there was a big silence… the fish was just 2 lbs, not a counter for us.

“I’m sorry, but I cannot count this one” I said with huge pain. David agreed. “I wouldn’t feel proud of it, if you counted this fish”. Richard screaming from the neck of the pool asked: “No blank?” “Yes, blank, too small” I replied. To make things even worse Richard hooks the first fish and lands it easily. David and I were determined to have a fish. Only five minutes to go! “I can’t see the line Federico, I don’t know where the fly is landing” he said. “No problem, I can see it… Let’s wade into the channel and cast downstream…move the fly…cast again a longer line way down, mend upstream…now gig it”. And on the last minute, a 5 pound sea trout slammed the egg sucking leech. “This is unbelievable” said Richard behind us with a big smile. Fish successfully netted and end of story. A good reminder of how difficult is to get a fish on every of the 12 weekly sessions. Congratulations David, you never gave up!

This week the weather was pretty good, the temperatures were between 21°C (70°F) and 4°C (39°F) degrees Celsius. During these days, the river level kept dropping. The water temperature was similar to last week, between 10°C (50°F) and 17°C (63°F). Richard M. not only was the top rod with 29 fish, he also got the biggest fish of the season so far, a fat 26 pounder. Congratulations for such a great week!

Floating lines and sinking lines between 5ft and 15ft were the most used, the fish were keen on taking on the surface, but in some pools the key was to go deeper with sinking tips. The Wonder Bug, the Turk’s tarantula, the Green Machine, Sun-ray Shadow, Collie dog, EMB, Aurelia Prince, Camila Chartreuse, were the most successful flies. 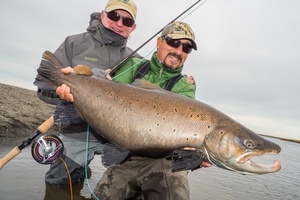 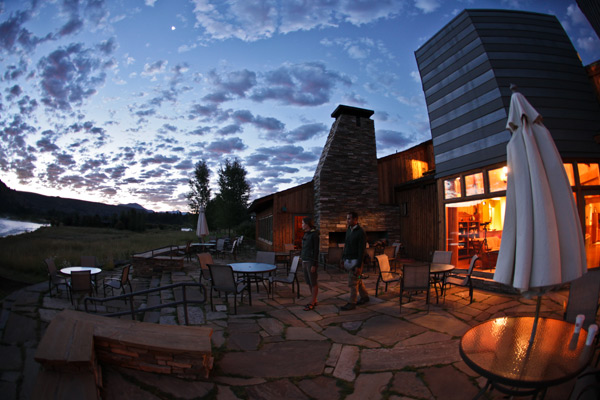 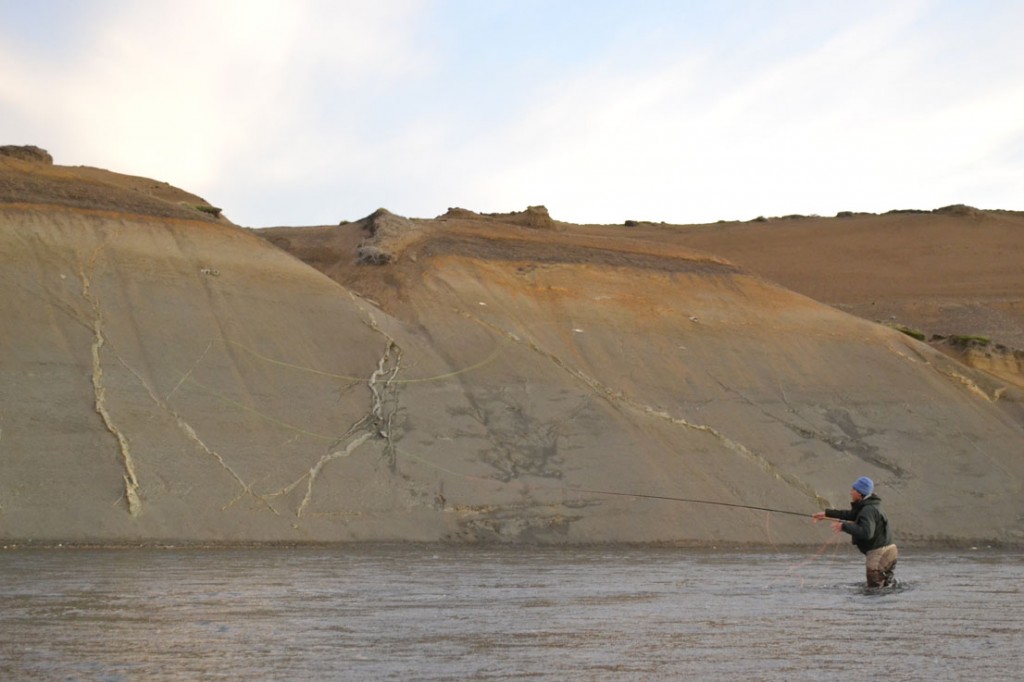